Comments Off on Master of None

Which is kind of surprising, considering he, like his much-maligned teammate, Marouane Fellaini, epitomizes an era that most United fans would love to forget. Blind was, perhaps, the perfect van Gaal player and represented everything the former gaffer wanted out of his United team. Blind was versatile and could play multiple positions. A great passer with outstanding vision, Blind was one of the few United players that seemed comfortable with van Gaal’s possession-heavy scheme. When van Gaal was switching formations and schemes like a groom trying on tuxedos, Blind was one of his constants, filling in at center back, left back and central midfield and doing whatever his boss demanded. He even chipped in with some important goals, including this belter against Liverpool and this last-gasp equalizer against West Ham on a night when his teammates seemed utterly confused by van Gaal’s rarely-used diamond formation.

Blind’s lack of strength, speed and height didn’t hinder him too much in van Gaal’s static scheme, which placed more of a premium on his positioning and passing. Under Mourinho, a self-professed fan of “specialists,” a versatile player like Blind with clear physical deficiencies was always going to struggle. Blind went from “jack-of-all-trades” to “master-of-none” overnight, and, outside of a brief period where he was first-choice at center back, spent most of the Mourinho Era on the bench. Making the decision to go back to Ajax (for more than United paid for him) was a no-brainer for all parties involved. Indeed, Ajax is treating this move like a true transfer coup, even rolling out the red carpet for their prodigal son.

Happy trails, Daley Blind. A true servant for United that, like his patron, helped steady the ship during uncertain times and gave his all for the club. 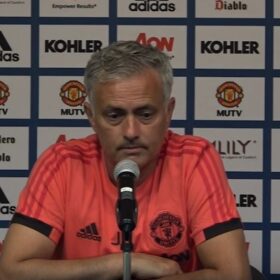