Typically, teams preparing to be sold try to keep their expenses and liabilities low so they can attract as many bidders as possible. This also makes sense from a sporting perspective. Why should a team spend big now, knowing the next owner might have different priorities or plans?

As such, we shouldn’t be surprised that Manchester United have decided to pursue loan deals instead of permanent moves in the just-opened January transfer window.

That’s not necessarily a bad thing, though.

United got their library card out early in the transfer window, signing former English international goalkeeper Jack Butland for the rest of the season on loan from Crystal Palace. Butland replaces fellow loanee Martin Dúbravka, who was recalled to Newcastle the moment the transfer window opened on January 1. The move was six months in the making, as Erik ten Hag wanted him in the summer before he broke his hand in a preseason friendly against, ironically enough, Manchester United.

For the club’s gaping hole at center forward, United passed up a chance to sign World Cup hero Cody Gakpo or pursue an expensive loan move for Atletico Madrid’s Joao Felix. Then again, neither of those two players are natural center forwards, which probably explains why United didn’t seem to try too hard for either player, despite longstanding ties to both of them.

Instead, United have turned to 30 year-old striker Wout Weghorst. The Dutch international had been playing at Beşiktaş J.K. via a season-long loan from Burnley. On Friday, United announced Wehorst would join the club on loan from Burnley for the rest of the season. As part of the deal, United agreed to pay €3 million to Beşiktaş to terminate the loan early.

The 6’6’’ Weghorst may be big in frame (he’s the tallest United forward since Zlatan Ibrahimovic and the tallest United player, overall, since Edwin van der Sar) but not necessarily in reputation. At least that was the case before the just-completed World Cup, where he etched his name into Netherlands history by scoring two late goals (including the equalizer from a trick play that happened, almost literally, at the whistle). He then etched his name into media lore by arguing with Sergio Aguero and being called a “fool” by Lionel Messi after the match.

On the one hand, it’s easy to dismiss him as a World Cup Wonder (and a one-match wonder, at that, at least that’s the opinion of former Dutch international and long-running Man Utd transfer target Wesley Sneijder). Indeed, his name wasn’t on anyone’s radar for a big move until after that match against Argentina.

It’s also easy to look at his poor performance at Burnley after moving there in January 2022 for £12 million from VfL Wolfsburg and dismiss him as a bad signing for United, loan or not. Tasked with replacing the departing Chris Wood, Weghorst only managed 2 goals in 20 appearances as Burnley suffered relegation.

Even worse, Weghorst didn’t win many fans in the dressing room with his attitude. According to the Daily Mail, his teammates felt like his confident demeanor bordered on arrogance and felt he was disrespectful for calling people out in public if they were underperforming. After all, it would be one thing if he were producing goals on the pitch, but 2 goals in 20 appearances is hardly license to talk about others’ shortcomings. His teammates also, reportedly, disliked his intensity, as they frequently received messages late in the evening to talk tactics.

Or another way to look at it is that he had a “big club mentality” at a small team — particularly, one that was already demoralized at being stuck in a relegation dogfight for much of the season. At United, his high standards will be shared by most of the locker room, to say nothing of the coaching staff (although he’ll still have to curb his reported penchant for calling out teammates).

It’s also possible that he was just the wrong fit for Burnley. For one thing, Weghorst has produced everywhere else he’s been. At AZ, Wolfsburg and Beşiktaş, his scoring ratio was close to one goal per two matches, making him far more reliable than either Anthony Martial or Marcus Rashford have been in their careers at United.

Additionally, Burnley tended to go through Route One and thump long balls to Wood as the basis of their offense. While Weghorst has the requisite height to be an Andy Carroll-type of target man, he’s not really that type of player. Despite his frame, Weghorst tends to score more with his feet than head. Instead, he likes to drop back to take part in buildup play, linking up with his midfielders and wingers. He seems to be more of an Alvaro Morata type of player — someone who’s good at finding space, making tricky runs into the box, and utilizing his passing skills.

And he loves to press. The Athletic even called him a “pressing monster” last season, pointing out that Weghorst averaged more pressures-per-90 minutes last season after coming over in January than any other player in the league. The highest United player on the list was Fred, who averaged nearly nine fewer pressure attempts per 90 than Weghorst.

In other words, he could be perfect for Erik ten Hag. The manager has looking for a forward that can lead the press, having flirted with bringing in Marko Arnautović over the summer only to abandon the plan after fan outcry (although now that ten Hag has some credibility, I wonder if he’d be able to sell this move to the supporters). Martial has shown flashes of being able to lead the line as a pressing forward, but is injury prone and erratic. Weghorst can play the way ten Hag wants to, and his fitness levels are top notch. That should be music to ten Hag’s ears, who has emphasized fitness as a necessary attribute from all of his players and has even consulted Tour de France winners for tips on how to boost nutrition and sleeping patterns (hopefully he didn’t call Lance Armstrong).

Of course, Weghorst will be judged on how many goals he scores and when he does so. If he can replicate his heroics against Argentina, then he’ll go down in United history as a great move — especially if he can help break the club’s long trophy drought. Maybe he’ll even earn a permanent move and be a nice squad player for the club going forward (hopefully, he won’t impact United’s search for a long-term solution up top, whether it be Victor Osimhen, Benjamin Sesko, Dusan Vlahovic, or Harry Kane). And if he doesn’t play well enough to earn a transfer, who cares? He’ll be back at Burnley in July, either looking for a new club or messaging his old teammates at all hours of the night. 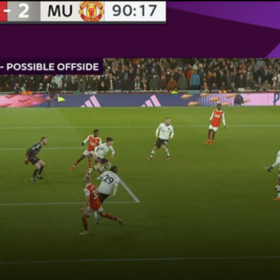