Recorded on the road during the band’s ill-fated “Monster” tour, New Adventures in Hi-Fi was a sprawling, ambitious album that caught the band at the peak of its creativity. The record also closed out R.E.M.’s initial five-album deal with Warner Bros., which saw the band become global superstars on the strength of a string of best-selling, and highly acclaimed albums.

Perhaps that was one reason why it felt like New Adventures in Hi-Fi was it for R.E.M. With the expiry of its contract, the band was looking at an uncertain future. While R.E.M. would have plenty of suitors and lots of big-money offers, it was perfectly valid to ask whether, after recording 10 excellent and influential albums, the band was a spent force.

To make matters worse, the band was coming off an exhausting, traumatic tour, during which drummer Bill Berry suffered an aneurysm on stage in Lausanne, bassist/keyboardist Mike Mills had surgery to remove an intestinal tumor and singer Michael Stipe had emergency hernia surgery. R.E.M. probably could have (and should have) taken an extended hiatus after that tour. Instead, the band went back to work.

Indeed, life on the road provides the central theme for the otherwise diverse and polythematic album. The band waxes poetic about loneliness and isolation — emotions exacerbated by life on the road. “Just arrived Singapore, San Sebastian, Spain, 26-hour trip/ Salt Lake City, come in spring over the salt flats,” Michael Stipe intones on the opening line of “Departure.” “Low Desert,” meanwhile, sounds like it could have been written about the band’s trials and tribulations during the “Monster” tour. “All the ashtrays, cities and the freeway drives/ Broken casino and waterslides/ Eighteen-wheeler, payback dice/ Gravity flows on the power line/ Jet stream cuts the desert sky/ This is a land could eat a man alive/ Say you’ll leave it all behind.” Meanwhile, a song like the gorgeous “Be Mine” takes on new meaning when examined through the lens of the lonely road lifestyle. No wonder they rarely toured after 1989. Even the album cover looks depressing.

Another reason why this record felt like the end for R.E.M. was because the boys from Athens, GA, just seem to be sick of their fame. “This is not my dream sister/ It is cold in heaven and I’m not sprouting wings/ I’m drowning…me,” Stipe sings on “Undertow.” On “Bittersweet Me,” the band lives up to the song title: “I’d sooner chew my leg off/ Than be trapped in this/ How easy you think of all of this as bittersweet me.” “The Wake Up Bomb,” shows off the band’s cynical side. “My head’s on fire and high esteem/ Get drunk and sing along to Queen/ Practice my T-Rex moves and make the scene/ Carry my dead, bored, been there, done that, anything,” Stipe sings bitterly. In fact, the band’s decision to release the hauntingly gorgeous, but unconventional “E-Bow the Letter,” as the lead single smacked of a band that didn’t care what the consequences were anymore.

Despite all of their trials and tribulations, the recording process for this album actually a fairly happy experience for the members of R.E.M. “We got into the studio feeling very happy and relieved that everyone was okay, especially Bill,” Mills said. “It brought us all much closer and made us realize how important we are to each other. Once we’d been through a crisis like that, making a record was a piece of cake.”

Plus, the band felt like it still had something to prove. “I do think that we touch on a wider range of music than just about anyone right now,” guitarist Peter Buck told dotmusic at the time. “The Beatles used to do it, Led Zeppelin used to do it and I don’t think we get enough credit for doing it.”

As a result, New Adventures in Hi-Fi is the band’s attempt to demonstrate its versatility by creating a diverse, multifarious record along the lines of The White Album or Physical Graffiti. In doing so, the album ends up being a good synthesis of the initial Warner Bros. era. Uptempo rock songs such as “The Wake Up Bomb,” “Undertow,” “Departure,” and “So Fast, So Numb” recall Monster or Green, while melancholic, introspective and acoustic-driven numbers like “New Test Leper,”

“How the West Was Won and Where It Got Us,” “E-Bow the Letter,” “Be Mine” and “Electrolyte” sound more like the songs on Automatic or Out of Time. The record even foreshadows the band’s next record, 1998’s Up, as “Leave” is built around electronic loops and effects.

Ultimately, New Adventures did, indeed, represent the end for R.E.M., but not because the band decided to fold. In fact, a couple of weeks before New Adventures came out, the band signed a new contract with Warner Bros. worth an astonishing $80 million. Obviously, that figure was slightly misleading. The band was only, really, guaranteed $10 million and the rest of the money came in the form of cash advances and an increased royalty rate. Still, the contract served as physical confirmation of R.E.M.’s pre-eminent status as, arguably, the biggest and best rock band in the world. And it represented a bold belief from both the band and its label that R.E.M.’s best days were still ahead.

Instead, it was the departure of an important band member that marked the end of R.E.M.’s time on top. Long dissatisfied with being in the public eye, Berry reevaluated his life after his health scare during the “Monster” tour and decided to leave the band. At first glance, the band’s decision to carry on as a trio seemed like no big deal. After all, Berry was just the drummer, and how often do you notice them? However, what we learned was that Berry had been a vital part of the band and one of its better songwriters. Once he left, the group was still able to function, but its days as a top band were over. The fact that R.E.M. stuck around for another 15 years and released five uneven albums probably says more about the power of contract law than anything else. 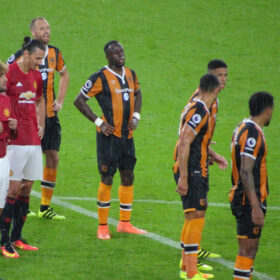 Podcast: Artificial Intelligence and the Law