Comments Off on Album Review: “Songs of Experience” by U2

After a tumultuous 2016 that gave us Brexit and Trump, Bono and Co. decided to go back to the drawing board – shelving plans to release Songs of Experience that year and delaying plans to undertake the second part of its “Innocence + Experience” Tour. For most people, that was just fine. Experience was originally conceived as a companion piece to 2014’s much-maligned Songs of Innocence, the infamous album that Apple automatically downloaded onto users’ accounts without their permission (and made it harder to delete than spyware). What made a fraught situation worse was that Songs of Innocence was really bad. Like “Worst U2 album ever” bad.

Like Grown Ups 2, Deuce Bigalow: European Gigolo, or G.I. Joe: Retaliation, Songs of Experience is the sequel very few of us were asking for. And yet, like Men in Black III, Iron Man III or Star Trek II: The Wrath of Khan, Experience is better than its immediate predecessor. Much better, actually.

Simply put, there are many more good songs on Experience than Innocence. “You’re the Best Thing About Me” is an unabashed love song and soaring pop anthem that’s on par with anything else they’ve ever done. “Get Out of Your Own Way” is a catchy tune that sounds like a distant cousin to “Beautiful Day.” “The Little Things You Give Away,” “The Showman,” “Lights of Home,” “Summer of Love,” and “13 (There is a Light)” are all better than anything on Innocence (the deluxe edition also includes a remix of “Ordinary Love,” which I liked more than the version that was from Mandela: Long Walk to Freedom).

I wasn’t too impressed with “American Soul” (complete with a spoken-word intro from Kendrick Lamar) when I heard it on the album. After watching them perform it on Saturday Night Live, it’s now my favorite song off the album. Like “Mofo” or “Bullet the Blue Sky,” or “Love and Peace Or Else,” “American Soul” seems like one of those songs that sounds better live than on record. It’s sure to be a highlight of the upcoming tour (tickets went on sale before the album came out, making you wonder about the band’s priorities- although several singles had already been released by then).

It’s also the most overtly political song on the album. One reason for the album’s delay was because Bono wanted to go back and write some politically-themed lyrics in response to Brexit and Trump. “There’s a moment in our life where a soul can die,” warns Bono, who could, very well, be talking about His Orangeness. “And the person in a country when you believe the lie.” “The Blackout,” makes reference to a “big mouth” who “says the people, they don’t wanna be free for free” – a line that could be about Trump, Nigel Farange or a whole lot of politicians.

”The Blackout” also crosses the line into corniness. “Statues falls / Democracy is flat on its back, Jack / We had it all / And what we had is not coming back, Zach.” No word on whether the next lines are: “Treaties broken/ American prestige is in the dumps, Trump / Protesters in the streets / Undecided voters need to get off the fence, Pence / Broken promises / We didn’t vote for tax cuts for the rich, Mitch.” But U2’s version of “50 Ways to Leave Your Lover” isn’t what makes this album seem out of touch.

Instead, it’s the band’s stubborn reliance on positivity and the power of love to overcome all of our divisions. In “Love is Bigger than Anything in its Way” (one of four songs with “love” in the title) tells listeners “I know the rage in you is strong” but that, rather than lashing out, try and “write a world where we can belong.” “13 (There is a Light)” makes the point more plainly, reminding people: “There is a light / We can’t always see / And there is a world / We can’t always be / If there is a dark / That we shouldn’t doubt / And there is a light / Don’t let it go out.” Album opener “Love is All We Have Left” goes even further, arguing that there’s “Nothing to stop this being the best day ever / Nothing to keep us from where we should be” before reminding us that “love is all we have left.”

It’s a welcome message in today’s world, but it also seems quaint and naive. After all, many of us believed that love would, eventually, win out and cause our fellow citizens not to vote for hatemongers who blamed our problems on a few convenient scapegoats. Nevertheless, it happened and the resulting world we have is fractured and toxic. Sure, it’s good to have positive messages like the ones on Experience to uplift and assuage us. I just don’t think that this album is the one to do it. Sure, it’s better than the last one, but it’s still a far cry from Achtung Baby or Joshua Tree, let alone lesser efforts like Zooropa, All That You Can’t Leave Behind or the underrated Pop and No Line On the Horizon.

The unabashed positivity also runs counter to the band’s history. Sure, the band has always, in some form, preached unity and co-existence. However, some of the band’s best and most memorable moments have come when it has gotten mad. The impromptu tirade Bono delivered about The Troubles during a live performance of “Sunday Bloody Sunday” was the best part of an otherwise forgettable Rattle & Hum. A decade later, the band, outraged over the ongoing war in the former Yugoslavia, committed to playing a full-scale PopMart concert in Sarajevo (complete with all the bells and whistles like the giant arch, the revolving lemon and the huge JumboTron), even though it would mean a substantial financial loss for the band. Nevertheless, they persisted and, the concert went down as a great moment for both the band and the war-torn city. In recent years, Bono’s activism has been more about cooperation with big-time donors like Bill Gates and politicians like George W. Bush, Jesse Helms, Tony Blair (tellingly, he said he wants nothing to do with Trump).

Maybe the band’s refusal to get cynical (something it had no problem doing in the 90s) despite the most daunting circumstances we’ve seen in generations is the ultimate form of revolution. Or it’s the ultimate act of tone-deafness from a band that’s struggling to hold onto its importance. “We don’t want to ever be a heritage act,” The Edge said in 2014. “It might happen, but we’ll go kicking and screaming into that mode. We feel the place for us to be is part of the conversation of contemporary culture and music and film and everything else, and we don’t see the reason why we can’t, because it’s been possible for various artists in different forms.”

There’s nothing particularly wrong with being a “heritage act.” For most top artists or bands, it’s an inevitable part of their careers. The Rolling Stones, The Who, Fleetwood Mac and the Eagles often don’t even bother putting out new albums before going on tour – their greatest hits are usually enough of a draw. Tom Petty’s last tour was a career retrospective. Other acts like Depeche Mode, AC/DC, Take That have been putting out albums that can best be described as “the part of the concert you have to put up with so that you get to hear the classics.” R.E.M. was headed this direction before they decided to break up.

It’s a lucrative lifestyle, but as Edge points out, it essentially marks the end of a band’s cultural relevance. With one foot already in the door (Bono and Co. weren’t exactly kicking and screaming when they hit the road earlier in the year to commemorate the 30th anniversary of one of its greatest albums), U2 needed to release a killer album to avoid moving, permanently, into the land of nostalgia acts.

Instead, we got Songs of Experience. To be sure, it’s a good album. I just don’t think it’s quite good enough. 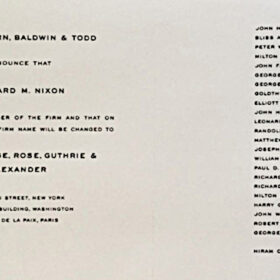