Just like how many great songs never, explicitly, mention their subject, Bono and company never once mentioned the name “Trump” while putting on a two-hour plus show that loudly, and proudly, proclaimed their love for the United States and the ideals and freedoms upon which the country is based – ideals and freedoms that run counter to what the current occupant of the White House stands for. Without ever dropping their veneer of positivity, Bono and company boldly criticized and condemned Donald Trump and his policies and made clear, in no uncertain terms, that they would not play ball with him the same way they had with other conservative politicians, including George W. Bush and Jesse Helms. On immigration, Bono and company thanked the country for “providing hundreds of years of safety and refuge for the Irish” before joking that he could be deported for “bad harmonica playing.” During the encore, the band dedicated “Ultraviolet (Light My Way)” to all of the strong women throughout history “who have resisted and persisted,” and displayed images on the gigantic video screen behind the stage of women ranging from Rosa Parks and Emma Goldman to Michelle Obama (who got a huge ovation) and, yes, Hillary Clinton. The band also dedicated “Miss Sarajevo” to Syrian refugees and played a video of a young Syrian girl who said her dream was “to go to America because it’s a beautiful country.”

Whether the people who packed into Soldier Field over the weekend felt the same way about their home country is anyone’s guess. Either way, it was nice to see that, despite everything that has happened, U2 could still express its love and faith in America. In that vein, “The Joshua Tree” was a perfect backdrop for a show that was as much about mourning the current state of affairs as it was about expressing faith in the underlying ideals of America. Released in 1987, “The Joshua Tree” represented both sides of the band’s love of the U.S., alternately waxing poetic about the promise of the American dream while cynically observing how things really were. U2’s adopted home country ate it up with a spoon, as “The Joshua Tree” went diamond in the U.S. while winning a boatload of awards, including Album of the Year at the Grammys.

The band felt inspired to revisit “The Joshua Tree” following Trump’s victory and found that the songs on the album, especially the ones that dealt with heroin addiction, labor strife, religion, and American militarism, had taken on new significance. “That record was written in the mid-eighties, during the Reagan-Thatcher era of British and U.S. politics,” The Edge told Rolling Stone. “It was a period when there was a lot of unrest. Thatcher was in the throes of trying to put down the miners’ strike; there was all kinds of shenanigans going on in Central America. It feels like we’re right back there in a way. I don’t think any of our work has ever come full circle to that extent. It just felt like, ‘Wow, these songs have a new meaning and a new resonance today that they didn’t have three years ago, four years ago.'”

As a result, they decided to break with precedent and go on tour without a new album to promote. Instead of completing “Songs of Experience” or whatever the next album is set to be called, U2 decided to hit the road and celebrate the 30 year-old “The Joshua Tree” by performing the album in its entirety.

Drawn almost entirely from the 1980s, when U2 was known, primarily, for its earnestness and activism, the setlist only emphasized the underlying themes of the evening. Kicking off with the one-two punch of “Sunday Bloody Sunday” and “New Year’s Day” from 1983’s “War,” before seguing into “Bad,” a song about heroin abuse that’s taken on renewed significance as a result of the ongoing opioid epidemic, the band closed out the pre-Joshua Tree mini set by performing the Martin Luther King, Jr., tribute “Pride (In the Name of Love).”

The band then moved onto the centerpiece of the concert: Playing “The Joshua Tree” in its entirety and in sequence. Aesthetically, it was probably the wrong move. While the entire album contains many classic songs that sound great live and have been played at many U2 concerts in the past, the second half of the album is not nearly as well-known as the loaded first half. As such, the crowd was ready to sit down after hearing the first four songs (“Where the Streets Have No Name,” “I Still Haven’t Found What I’m Looking For,” “With or Without You” and “Bullet the Blue Sky“). Even though the latter half of the album contains some true gems like “Red Hill Mining Town,” “One Tree Hill,” “Running to Stand Still,” and my personal favorite song on the album, “Trip Through Your Wires,” the lack of well-known hits during the second half of the set took much of the air out of the stadium. Maybe they would have been better off putting known crowd-pleasers “Where the Streets Have No Name” and “Bullet the Blue Sky” at the end so the fans would have something to anticipate. Or they could have stuck on a few Joshua Tree b-sides at the end, like “Sweetest Thing,” which was a bona fide hit for the band in 1998.

During the encore, U2 stuck, mostly, with optimism and idealism. Steering completely clear of its ironic and cynical albums (like “Pop” or most of “Achtung Baby“) as well as more recent efforts such as “No Line on the Horizon,” “Songs of Innocence,” and “How to Dismantle an Atomic Bomb,” the band focused on its more upbeat and positive repertoire with songs like “Beautiful Day,” “Elevation,” “I Will Follow” and “Ultraviolet.” “One” also fits the bill, although its lyrics are anything but upbeat. The song has become closely associated with the fight against poverty and HIV/AIDS and Bono made sure emphasize that it had been the U.S. government, under George W. Bush, that had helped stem the AIDS epidemic in Africa. “Eighteen million people are alive now thanks to U.S. taxpayers,” he said, no doubt choosing to phrase it that way in response to Trump’s push for massive tax cuts.

And hey, if the band ever gets cynical about Trump, it can always hit the road and play “Achtung Baby” in its entirety. 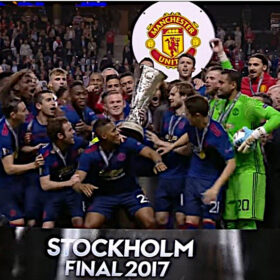 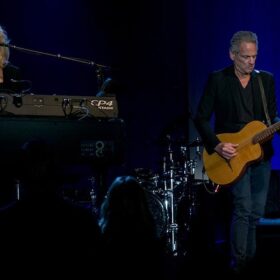