Before the initial meeting of the Strategy Board ended, Nixon did a quick, informal tally of his presumed delegate count and came up with 603. With 667 needed to clinch the GOP nomination on the first ballot, Nixon was already in good shape to get the nod. However, as he and others with his campaign knew all too well, simply getting the nomination wasn’t enough. Nixon needed to look like a winner, and perhaps just as importantly, he needed a way to deemphasize his less attractive features.

As his colleagues and subordinates all attest, Nixon was hardly devoid of charm. Television may not have been his best friend over the years, but in the past, he had demonstrated an ability to be likeable on the small screen—like he had been during that 1963 appearance on The Jack Paar Program. But to most of America, he was still the brooding, mean-spirited caricature with the droopy jowls, Pinocchio nose, and perpetual five o’ clock shadow that had taken his ball and gone home after things didn’t go his way. Despite spending the last several years softening his image while strengthening his credentials as an elder statesman and party leader, to many in America, Nixon was still the same not-so-loveable loser, and no amount of piano playing on late night television would change that.

Nixon needed to undergo a complete repackaging if he wanted to have a chance at winning the White House. So, he did what was starting to become a custom for him: he asked Garment to figure something out. “In his view, I had the requisite credentials,” Garment said. “I was trustworthy, politically ignorant and an energetic recruiter. I had experience in persuasion (trial lawyer) and show business (jazz saxophonist).” Admittedly, Garment lacked actual advertising experience, but to Nixon, that was a plus. “Nixon’s guidelines were simple: Don’t hire an advertising agency,” Garment recalled. “They’re dinosaurs and devour money.”

Garment immediately recruited Frank Shakespeare, the president of CBS Television and a staunch political conservative. Shakespeare seemed on track to be the head of the network; however, his real life’s passion was to “destroy liberals”—a quality that must have been music to Nixon’s ears. Shakespeare decided that Nixon was his man in 1968 after coming to the realization that his first choice, Reagan, was too inexperienced. In July 1967, Shakespeare met with Nixon at the Mudge offices at 20 Broad Street, after which Nixon asked Garment to find a place for the experienced television executive within the campaign. Garment took Shakespeare to lunch, and the two became fast friends. “At our initial lunch, Shakespeare delivered an illuminating two-hour lecture on the impact of modern television,” Garment said. “It was transforming not only politics, he said, but the way the culture received and used information.” Calling television “the cruelest of all media,” Shakespeare warned that it could sink Nixon in a heartbeat unless he learned how to harness its power to project the image he wanted.

Shortly after their lunch, Shakespeare and Garment met up in a CBS screening room along with Evans and Ray Price. Like a coach breaking down game tape to figure out where the team had gone wrong, the men critiqued six or seven hours worth of Nixon’s television appearances stored in the network’s vast archives, and what they found was that Nixon’s prepared stump speeches brought out the worst in him. When forced to stand up before a crowd and deliver some variation of the usual talking points, Nixon was stiff and awkward. Rarely inspirational, Nixon’s overly formal style on the stump made him sound more like a professor giving a lecture or a lawyer trying a case in court. Worse, his tendency to perspire kicked in, making him look deceptive and deceitful. On the other hand, the group found that, in less formal, one-on-one sessions, he was relaxed, easygoing, and even came across as somewhat likeable.

That observation squared with Garment’s overall view of Nixon. For a self-described “liberal Democrat,” Garment, obviously, had a preconceived notion of Nixon that was largely influenced by his public persona and his prominent facial features, which Garment called “odd looking.” However, he also recalled being surprised that, as he got to know Nixon on a personal level, he found him to be witty, interesting, and even self-deprecating. Garment was profoundly impressed by Nixon’s intelligence, an important quality that gave Nixon the foresight to embrace his negative public persona and utilize it to his advantage. “It would give him, in addition to his 99 percent name and face recognition, the capacity to surprise,” Garment said. “To set the low public expectations against his large private abilities and permit the press to discover, gradually, some realities that they would dub the ‘new Nixon’ running again for President.”

Sears concurred, observing that Nixon’s personality was not conducive to being a great politician. “He was always very anxious,” Sears recalled. “He didn’t like to be with people he didn’t know.” Sears also stated Nixon’s primary appeal wasn’t that he was likeable but that he was someone that could be easily admired. “He was smart—very, very smart,” said Sears. “Sometimes, I don’t think he even knew how smart he was. You could also admire his doggedness. No one outworked him.”

So it was up to Nixon’s partners and employees at Nixon Mudge to figure out how best to bring out the side of Nixon that would engender admiration from the voters instead of distrust, discomfort, or outright revulsion. Garment hired Harry Treleaven, an advertising executive who had been at J. Walter Thompson for eighteen years—the same company Haldeman had worked for. The small, thin, gray-haired man looked like the archetype of the 1960s era ad man, wearing a Brooks Brothers–style suit as if it were a uniform while displaying a stern, stoic demeanor as he ran important ad campaigns for the likes of Ford, Lark Cigarettes, and RCA. Joe McGinniss, who wrote The Selling of the President after receiving near-unlimited access to Nixon’s media team, compared Treleaven to a high school vice principal and observed that he resembled William Scranton.

Treleaven had cut his teeth working on George H. W. Bush’s successful 1966 House of Representatives race. Bush had lost his first electoral race, a 1964 Senate campaign in Texas, against incumbent Democrat Ralph Yarborough, and another defeat for Bush could very well have stopped the future president’s political career dead in its tracks. As a politician, Bush had always had some serious handicaps. Like Nixon, he could be awkward in public and hardly exuded charisma. Even worse, in a state that craved authenticity, Bush was about as Texan as Taco Bell. A New England born and bred blue blood whose father had been a prominent moderate Republican senator from Connecticut, Bush, the former Yale first-baseman, had only moved to Texas so that he could get into the oil business. If anyone were a card-carrying member of the very Eastern Establishment that Nixon hated, it was Bush. And like Nixon, Bush was an uninspiring, charismatically challenged campaigner who had a pedantic style of speaking.

Yet Treleaven was able to reinvent his candidate as a casual “man of the people” who cared, deeply, about the problems of everyday Texans and would fight his heart out for them. What issues those were or how he would go about fighting for his constituents was left unsaid. Instead, Treleaven, who sank 80 percent of his campaign budget into advertising, the vast majority of which went to TV, knew that all he had to do was to create the image of Bush as a “fighting underdog,” and voters would naturally flock toward him. “People sympathize with a man who tries hard,” Treleaven said. “They are also flattered that anyone would really exert himself to get their vote. Bush, therefore, must be shown as a man who’s working his heart out to win.” In that vein, Treleaven made sure that Bush was constantly on television with his suit coat casually slung over his shoulder and his sleeves rolled up as he worked his tail off to shake as many hands and listen to the concerns of as many voters as possible. Again, it didn’t matter what he believed in or if he was even going to help the voters he spoke to. All that mattered was that it looked like he cared. In the end, Bush won with 58 percent of the vote and would become a staunch Nixon backer until the Watergate scandal drove a wedge in their alliance. 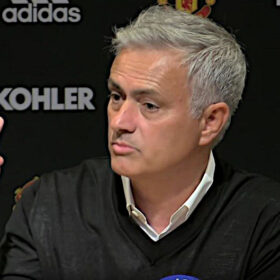