Comments Off on Album Review: “Odyssey” by Take That

“That day seems to be over,” Gary Barlow told MusicWeek. “With everything being available now, the Greatest Hits is already online. And we have such a supportive audience they’ve got everything, in fact they’ve probably got it.”

Instead, Take That have released Odyssey – a collection of their best-known songs that have been remixed, rearranged, mashed-up, or in some cases, re-recorded with guest artists like Boyz II Men (“Love Ain’t Here Anymore”) and Barry Gibb (“How Deep Is Your Love”). Billed as a “re-imagined” greatest hits record, the 2-disc collection draws from every Take That studio album, as well as famous non-album singles like “Rule the World” (although they still won’t release this one). Interspersed throughout the set are clips from interviews and live performances, as well as crowd noises pumped in from live performances at random intervals.

In some cases, the “re-imagined” versions improve upon the original. “Patience” sounds great with its new orchestra accompaniment, giving the song a soaring quality that the original lacks (although the tacked-on outtro from “Wooden Boat” seems gratuitous – maybe they just did it so that Jason Orange would have a vocal credit on the album). “Rule the World” also gets the orchestral treatment – in this case, the band strips away most of the pop elements in the song and use the orchestra to give the song an ethereal feel that underlines the fantasy elements that inspired it (the song was written for the 2007 period piece Stardust). Additionally, “Sure” benefits from its more pronounced R&B arrangement, giving the song a New Jack Swing feel to it.

On the other side of the coin, some songs are hurt by the new production. “Never Forget” starts off, pretty much, the same way the original one does, only to morph into a gospel song halfway through and end in a chaotic, cacophonous mess. “Relight My Fire” becomes a less danceable song with the disco and funk elements removed and a weird-sounding Autotuney synth track added.

However, most of the “re-imagined songs” don’t seem to contain a whole lot of re-imagination. Indeed, if you listen to this album in the car or in a noisy area, you might not be able to figure out just what changes producer Stuart Price (who produced the single-best Take That album, 2010’s Progress, and had production credits on III and Wonderland”) made. “The Flood” and “Back for Good” don’t sound all that different, bar a louder piano accompaniment and superfluous instrumental outtro on the former and a longer gap between the opening riff and the first verse on the latter.

There’s also a strange distribution of songs. Mediocre albums like Nobody Else, Wonderland, and III are represented more heavily on this collection than Progress. Maybe Price didn’t feel like re-visiting the one Take That album he produced on his own. Take That’s second-best album, 2005’s Beautiful World only has two songs on the collection, which seems unfair, given how important that album was in jump-starting the second phase of the band’s history.

The two collaborations, meanwhile, hint at the potential of this “re-imagined greatest hits” approach. Boyz II Men are a natural choice for “Love Ain’t Here Anymore” (indeed, my wife said she could see them doing their own version of this song) while getting Barry Gibb to add his own imitable vocal style to his own “How Deep is Your Love” is a no-brainer. Those two songs (along with the infectious new single “Out of Our Heads” – a song I didn’t care for when I first heard but now think I love) are among the highlights of this collection. In fact, I would have liked to have heard more duets – similar to what John Fogerty did on Wrote a Song For Everyone. Maybe “These Days” featuring Harry Styles (since it kind of sounds like a 1D song). Or “Sure” featuring Kylie Minogue (she did go through a New Jack Swing phase). Or “Babe” featuring Liam Gallagher (he can definitely relate to what the protagonist in the song is going through).

But of course, all of this is secondary to the ginormous 30th Anniversary Tour the band has planned. If we needed confirmation that the band is, essentially, a touring band now, Barlow pretty much admitted it. “If I could be bold, I don’t give a shit whether the new album’s a hit or not,” Barlow told the Telegraph. “Even if it’s a flop, we’re still going to go on tour next year and play to 600,000 people.” Whatever the faults of this “re-imagined anthology,” it sure beats another bad album. 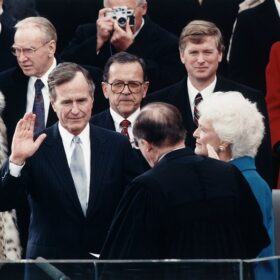