Comments Off on Good as Gold

When the bottom fell out of the American economy in 2008 because of the housing bubble, gold prices went through the roof. In March 2008, the same month Bear Stearns collapsed, the price of gold per ounce hit $1,000. It continued to shoot up as the Great Recession took hold, and kept climbing even after the economy started showing signs of recovery, hitting a then-record $1,873.80 per ounce in August 2011. Things calmed down for a bit, and gold prices hovered in the low-$1,000’s for most of the preceding five years before rocketing up again this year — most likely due to economic uncertainty as a result of the COVID-19 pandemic. The price of gold hit $2,000 per ounce in August 2020 and has been close to that ever since.

So the moral of this story is that I won’t be buying any gold coins in the near future. But that’s okay. At least I have the above 1910-D Half Eagle, which has long been one of my absolute favorites.

One of the most beautifully designed coins in American history, the Indian Head gold eagles have always been popular with collectors.

The genesis of the coin came from President Theodore Roosevelt’s 1904 letter calling for more beautiful coin designs. Famed coin designer Augustus Saint-Gaudens was tapped to redesign the four gold pieces then in circulation (double eagle, eagle, half eagle and quarter eagle). He turned in his now-famous and widely beloved front-facing Walking Liberty design for the double eagle. Rather than duplicate that design for the eagle, Saint-Gaudens, with Roosevelt’s blessing and encouragement, came up with an obverse consisting of a Liberty head bust wearing a Native American headdress.

Saint-Gaudens died before he could complete the half and quarter eagles. For the unfinished coins, the Mint assumed it would simply shrink either one of Saint-Gaudens’s designs. However, they ran into problems trying to replicate either design onto a smaller coin while also including the requisite phrases (“E. Pluribus Unum” and “In God We Trust” – the latter had been left off the Saint-Gaudens double eagle and it caused such a outrage that Congress stepped in and passed a bill requiring that slogan to be on gold and silver coins going forward).

In January 1908, William Sturgis Bigelow, a Boston based doctor and world traveler who happened to be a close friend of Roosevelt’s, wrote to the President calling the Saint-Gaudens double eagle “the best coin that has been struck for 2,000 years.” He also mentioned he was working with others on a gold coin that could be produced in high-relief while also being able to stack easily (something that would help bankers and merchants). Roosevelt was very interested in this idea, and the Mint eventually brought in sculptor and former Saint-Gaudens student Bela Pratt to execute the plan for the undesigned half and quarter eagles.

Pratt kept Saint-Gaudens’s reverse design of a standing eagle. For the obverse, however, he eschewed the Liberty head-based design for a more realistic-looking American Indian. I think Pratt’s design blows the Saint-Gaudens-designed $10 coin out of the water. While I also love the buffalo nickel design, I think this one surpasses it due to aesthetic beauty of the full headdress. But you can’t really go wrong with either one. In fact, both coins are regularly considered to be among the most beautiful coins in American history.

The obverse was also noteworthy for another reason. Unlike any other coin in American history, Pratt engraved the design into the gold planchet, recessing the Native American image below the surface of the coin, which would allow it to be struck in high relief and protect it from wear-and-tear. There is an especially deep recess where the neck is, giving the coin a noticeable v-shaped groove.

But like many coins that have gone on to be highly acclaimed, the Indian Head quarter and half eagles were not warmly received when they were released in 1908. Perhaps the most famous criticism came from Philadelphia coin dealer Samuel Chapman, who believed the recesses on the obverse would result in the coin becoming a Petri-dish of germs, bacteria and other unsanitary things.

The head of the Indian is without artistic merit, and portrays an Indian who is emaciated, totally unlike the big, strong Indian chiefs as seen in real life. The treatment of the head is crude and hard, with sharp, abrupt outlines, as if carved by a mere metal chaser; and on the reverse is a reproduction of the Saint-Gaudens’ eagle, which represents not our national bird (the white-headed eagle – commonly but erroneously called the bald-headed eagle – which has no feathers on its feet), but resembles more closely the golden eagle, which is also indigenous to Europe… The sunken design, especially the deeply sunken portion of the neck of the Indian, will be a great receptacle for dirt and conveyor or disease, and the coin will be the most unhygienic ever issued.

The criticism was such that, according to historian Roger Burdette, Roosevelt was willing to violate his “speak softly” mantra and respond to Chapman directly. Bigelow, however, talked him out of it and did it instead. He pointed out that Pratt had taken his design from an authentic photograph of an American Indian “whose health was excellent.” “Perhaps Mr. Chapman has in mind the fatter but less characteristic type of Indian sometimes seen on the reservations,” Bigelow said.

Bigelow was similarly dismissive of Chapman’s critique of the eagle image while tossing out a surprisingly frank observation from his one-percenter perch. “The question of hygiene has more relation to silver coins than gold, as they find their way into dirtier pockets,” Bigelow said. “A dirty gold coin would be an anomaly. I have never happened to see one.”

The quarter eagle was issued from 1908 to 1915, and after a World War I-related stoppage, production resumed from 1925 to 1929. Similarly, the half eagle was struck from 1908 to 1916, and in 1929. The Great Depression halted production of these coins, and any possibility they might be brought back into circulation ended four years later.

In 1933, another Roosevelt, Franklin D., issued an executive order forbidding Americans from hoarding gold coins out of fear that doing so was worsening the effects of the ongoing Depression. The order required Americans to turn over all but a small amount of their gold coins, bullion and certificates, and also had the effect of ending the production of new gold coins. The order also resulted in one of the most famous and expensive coins in American history, as the Mint ordered all 1933 double eagles to be seized. A few slipped through the cracks and are illegal to own. The one exception was a specimen owned by famed coin collector King Farouk of Egypt, which was sold for then-record $7.37 million in 2002 with permission from the Mint.

The Mint wouldn’t produce another non-commemorative gold coin until 1986, when the Gold Eagle program got underway. This time, they were able to replicate the famed Saint-Gaudens double eagle obverse design for the smaller denominations. The Mint modified the reverse design, going with a flying eagle carrying an olive branch towards a nest containing his family.

Because they hold little numismatic value, the price of a gold eagle is largely dependent on the market value of gold. As such, when I bought the above 1998 Gold Eagle in 2000, it only cost me about $40 since it only contains 1/10 oz. of gold. Nowadays, this coin costs upwards of $200 or so (depending on whatever markup coin dealers put on it).

So, the moral of this story is “stay away from gold coins for the foreseeable future.” And assuming prices never get back to where they were in the 90s, you’ll probably want to be selective with your gold purchases from here on out. Unless you have King Farouk money, of course. 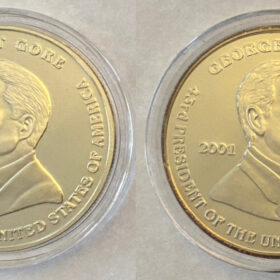