Review: “How I Met Your Mother” Series Finale

Until the last five minutes, the series finale of “How I Met Your Mother” was excellent. Then, like Robin Scherbatsky falling into a pile of horse manure, we got a horrible ending that betrayed many of the qualities that made the show so great in the first place.

When the show first debuted, I had little hope for it. I only watched because I was a “Buffy the Vampire Slayer” fan, and Willow was in the cast. Plus, I figured it would be amusing to see grown-up Doogie Howser doing crazy things. I only knew of Josh Radnor from this clip, and didn’t know about Jason Segal (I wasn’t a “Freaks and Geeks” fan) or Cobie Smulders.

I was drawn to the show because of the obvious chemistry between the actors. Their joy at working together came through on the small screen and they formed a tight, warm pseudo-family that we, the fans, became a part of. Additionally, I was struck by the intelligence of the dialogue, the innovative uses of flash-backs and flash-forwards, and the effective use of the narrator to drive the plot or, in some cases, to be part of the comedy. The show employed the usual sitcom cliches (Ted the hopeless romantic, Barney the inveterate womanizer, the love-triangle between best friends, the majority of scenes taking place on one or two sets), but didn’t rely on them. Instead, the plots were original and often highly intricate. However, viewers did not have to be experts in the show in order to follow what was going on in any particular episode (Barney’s playbook and how he used it to get Robin is a perfect example – you can watch “The Final Page” and appreciate it without having to watch “The Playbook” or any of the previous episodes from when Barney and Robin were a couple- however, it helps if you have seen them).

The show was also well planned out. Instead of having to write on the fly and leave themselves open to being inconsistent (how many family sitcoms end up retconning one of their kids away a la Chuck Cunningham?), the series was sketched out in great detail so that the flash forwards would always be consistent with what the writers had originally envisioned. There’s a reason why we didn’t see Marshall’s dad at that Thanksgiving in the future when lightsabers have been approved for everyday use like cutting turkeys.

The strange thing about the controversial finale is that, until the last five minutes, everything worked for me. I get that Barney and Robin couldn’t last as a married couple. At their core, both Barney and Robin were too self-centered and incapable of sublimating parts of themselves to accommodate the other. A perfect example was “Bagpipes,” where Barney and Robin try to prove they’re a better couple than Lily and Marshall and get the latter to start fighting. By the end of the episode, Lily and Marshall simply decide that it’s not worth fighting over and that neither of them have to be right- a concept that Barney and Robin find foreign (although, strangely, that lesson seems to have been lost on Marshall by the time “Sunrise” comes around).

The way the gang drifted apart was also spot on. When you’re young and hanging out with your friends all the time, not only do you never want it to end, but you can’t imagine what life would be like without them. But time always wins out, and people inevitably grow apart. Additionally, no matter how tight-knit a group of friends may appear to be, group dynamics are always complicated, especially when love is involved. As such, it made complete sense for Robin to pull away (especially since she was always the new kid in the group). Having children is an even bigger reason in why friends become distant. I have friends I haven’t seen in years because they have kids now and they have a whole new set of priorities. And, frankly, that’s the way it should be. Between the finale and the last few scenes in “Gary Blauman,” the show did an excellent job in showing how people who are very important to you can, nonetheless, drift away and cease to have a major presence in your everyday life. It doesn’t mean you love them any less or that they won’t be there for you in the future. It just teaches you to cherish the good times and not to be afraid when change inevitably comes.

Many of the little things in the finale also worked. Marshall having to go back to a job he hated in order to support his family was one thing that made sense to me. How many people have had to stick it out in a bad job because they had to make ends meet? Chasing dreams is one thing, but Marvin, Daisy and the third kid weren’t going to feed themselves. Barney dressing up like Diamond David Lee Roth was an interesting metaphor. For one thing, the makeup job on him made him look older than his character was (made sense since he was in a flash forward), and dressing like Roth circa 80s (say 1984, during the “Jump” video) said a lot about how Barney was clinging onto his youth (luckily, we didn’t see him attempt the mid-air split that Roth has long since given up doing). I also enjoyed how Tracy (the Mother) seamlessly fit into the group. Between giving Barney lip about his perfect month (“Number 31? What a lovely name, is it French?”) and going to see “Robots vs. Wrestlers” with the others, it’s clear that she would have been a great member of the group from the very beginning.

In the end, what ruined the finale was the ending, which was the cruelest thing a show has done to its fans since Tommy Westphall stared at the snow-globe or when Roseanne retconned most of her life. Fans can forgive a lot of things (for instance, I still can’t believe that I stuck with “Alias” for as long as I did), but they’ll never forgive a show for wasting their time. Don’t believe me? Ask “Dallas” fans how they felt after Bobby Ewing stepped out of the shower. Or better yet, check the Nielsen ratings– the show never recovered. Basically, the entirety of season 9 (Weekend at Farhampton) was a waste of time. Even though I understood why Barney and Robin split, I didn’t need an entire season building to their marriage if the writers were just going to undo it a few minutes into the following episode. Years of character development and emotionally wrenching episodes where Ted and/or Robin realized that they weren’t good together were a waste of time. Even the excellent 200th episode, my favorite of the season, in which we learn of Tracy’s backstory, was a waste of time.

Speaking of Tracy, the writers and Cristin Milioti did a little too good of a job in making her an appealing and likeable character. They made us fall for her, only to make her an afterthought (even in death) just so Ted could get back with his original love interest. As one of my friends put it, in the end she was just a MacGuffin.

I get that show-creators Carter Bays and Craig Thomas had the ending in mind from the very beginning and felt they were remaining true to the original vision of the show, which was Ted and Robin belonging together. TV critic Alan Sepinwall thinks Bays and Thomas booked themselves into a corner by filming the ending with Ted’s children after season 2. The ending would have made sense had the show ended after the third or fourth seasons, when there was still hope for the Robin/Ted coupling. Unfortunately, the show became a victim of its own success by staying on the air far longer than anyone anticipated and, in order to make fans accept the Robin/Barney pairing, spent a good deal of time convincing us that Robin and Ted weren’t right for each other. The show’s original conceit may have been to pair Robin and Ted, but like in real life, we moved on.

I agree with Sepinwall that Bays and Thomas could have stuck the original ending on the DVD set as an extra while filming a new one. They were concerned that the kids would have aged too much from season 2 to now, but they could have played with that. They could lampshaded it by showing that the kids have aged so much from the time Ted started his story that they’re ready to go to college now. Have them thank their father for telling them the story, albeit in a long-winded manner, have one of them make a crack about how the story sure featured a lot of Aunt Robin, and then end the show by having Ted look at the blue French horn. That way, it’s up to the viewer whether or not Ted ever actually followed through. Instead, we got the “Friends” ending. For a show as original as HIMYM, it was surprising to see them take the easy way out.

Plus, we never did get an explanation for why Future Ted sounded like Bob Saget… 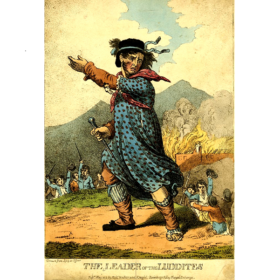