I still can’t believe Pantera’s Far Beyond Driven debuted at #1 on the Billboard 200.

Released twenty years ago (the day I turned 16 – although I didn’t get it for my birthday), Far Beyond Driven was perhaps the heaviest album to ever enter the charts in the top slot. For some perspective, the previous week’s fastest seller was The Sign by Ace of Base. After a week at the pinnacle from April 9 to 16, 1994, Far Beyond Driven was replaced by Bonnie Raitt’s Longing in Their Hearts. Other albums to hit number-one in 1994 included Tim McGraw’s Not a Moment Too Soon, Mariah Carey’s Musicbox, The Lion King soundtrack, R.E.M.’s Monster and Kenny G’s holiday album.

Pantera’s “third” album (more on that in a moment) is hardly its best. The two preceding albums, 1990’s Cowboys from Hell and 1992’s Vulgar Display of Power, were both superior. The best songs off Far Beyond Driven, (singles “Five Minutes Alone” and “I’m Broken,” as well as “Slaughtered,” “Strength Beyond Strength” and “Hard Lines, Sunken Cheeks”) are inferior to the top songs on either Cowboys or Vulgar.

What distinguishes Far Beyond Driven from its predecessor albums is its attitude. The album plays more like a statement; it’s less a collection of songs than a blistering manifesto of pure aggression, nihilism and anger. Musically, there isn’t much difference between Far Beyond Driven and Vulgar Display of Power. However, what the band does on Far Beyond Driven is take the heavy songs from Vulgar and crank it up to 11. Whereas lead “singer” Phil Anselmo used to sing (and sing quite well) on previous records, he more or less drops that in Far Beyond Driven. Instead, he growls, grunts, screams, yells, curses, or speaks in ominous tones on just about every song on the album. Lead guitarist Darrell Abbott drops the “Diamond” nickname (a tribute to “Diamond” David Lee Roth) he had used since the band’s inception and becomes “Dimebag” Darrell. He’s still the same Darrell, playing the meanest, nastiest riffs of any heavy metal guitarist out there. Unlike his “Diamond” days, though, “Dimebag” stays away from the melodic riffs he performed on previous Pantera records, like in “Cemetery Gates” or “This Love.” Instead, he, like Anselmo, takes things to the extreme and cranks out one hard-hitting riff after another. Rhythm section Rex and Vinnie Paul, meanwhile, perfect their synchronized staccato, giving the songs on Far Beyond Driven a backbeat that sounds like a machine gun. After listening to Far Beyond Driven for the first time, I was both enthralled and in a serious amount of pain.

In other words, this album was perfect for moody adolescents like I was, back then.

Far Beyond Driven is the culmination of a stunning and rapid transformation for the band. While 1990’s Cowboys From Hell is Pantera’s acknowledged debut album, the boys actually had four mostly glam albums that preceded it: Metal Magic in 1983, Projects in the Jungle in 1984, I Am the Night in 1985, and Power Metal in 1988. However, Pantera treats those albums the way Van Halen treats the Gary Cherone era or how Alanis Morissette deals with her past as a bubblegum pop singer– they never happened!

But those albums did happen. And when you consider the band’s entire discography, it’s hard to reconcile the glam version of the band with what it became on Far Beyond Driven. However, it’s important to remember that the band’s evolution was conscious and intentional. Glam metal was dying by the time Anselmo joined the band in 1987. The band chose to go heavier in a bid to stay relevant and become more popular. It paid off in spades, but left them with no place to go. Cowboys was about reinvention and Vulgar showed a band on the rise. With Far Beyond Driven, the band has reached its pinnacle and knows it. “We’ve grown into a monster! An arrogant, explosive m*********,” Anselmo intones on the album opener, “Strength Beyond Strength.” Meanwhile, the second song on the album, “Becoming,” has the phrase “becoming God-size” as part of its chorus. Clearly, these guys haven’t been humbled by success.

It’s probably the most honest emotion expressed on the album. Given their rapid transformation over the years, it’s fair to ask how much of Far Beyond Driven is genuine and how much of it is contrived. The lyrical content is more or less designed to shock you. It doesn’t get any less subtle than “Good Friends and a Bottle of Pills,” a spoken-word piece that opens with: “I f***** your girlfriend last night. While you snored and drooled, I [word rhymes with ducked] your love. She called me Daddy.” Not even Luther Campbell’s lyrics are as straightforward as that. Even the original album cover (which was banned in most countries – I actually had one) seemed like a cheap ploy to generate controversy. It was no different than what Metallica had tried to do with its debut album. Originally entitled “Metal Up Your A**,” the cover consisted of a toilet with a sword coming out of the bowl. Much like the songs on the album, Pantera’s original album cover takes it to the extreme and actually has the metal going somewhere.

The other piece of honesty is in the original liner notes, which basically apologizes for including a cover of Black Sabbath’s “Planet Caravan.” A mellow tune that serves as a nice comedown from all the angst on the album, the band seemed to know that its hardcore fans would hate it and accuse the band of going soft or selling out. “This is a Black Sabbath song off of the Paranoid album,” Anselmo wrote in the liner notes. “So don’t freak out on us. We did the song because we wanted to. It has nothing to do with the integrity of our direction. It’s a tripped out song. We think you’ll dig it. If you don’t, don’t fucking listen to it. Thanks.”

Why would any heavy metal band feel the need to apologize for covering a Black Sabbath song? After all, it’s safe to say that most of them would never have picked up a mic if it hadn’t been for Sabbath. But Pantera knew, much like Metallica before them, that heavy metal can be a limiting genre, and its fans can be even more limited. Cowboys was heavier than anything they had done before, but there were still traces of their glam roots (witness the high note in “Cemetery Gates”). Vulgar was even heavier than that. Far Beyond Driven was so heavy that the band had nowhere to go from there. Metallica realized that and got hammered as sell outs when it tried to change direction with “The Black Album.” Pantera seemed to realize that too, as its follow-up, 1996’s The Great Southern Trendkill still deals with dark subject matter and is heavier than most records that were on the charts then. However, it’s a conscious step-back from Far Beyond Driven and is more introspective (partially due to Anselmo’s worsening drug habit and deteriorating relationship with his bandmates). Trendkill didn’t do nearly as well as its predecessor, and the band was more or less defunct by the time 2000 rolled around. Four years later, Dimebag Darrell was tragically murdered while on stage.

Given how things turned out for the band, listening to Far Beyond Driven is a bittersweet experience. Sometimes, an album that represents a band at its peak also foretells a precipitous fall. Far Beyond Driven is such an album. Pantera was never bigger than it was in 1994 when the album hit #1. And they would never be as big again.

The 20th anniversary re-release includes a remastered version of the album, plus the obligatory bonus disc, which in this case, contains the band’s set from Donington in 1994. The live songs are interesting, if you’ve never heard them before. Oddly, the live disc only contains three songs from Far Beyond Driven while relying heavily on Vulgar. That could be a good thing, depending on how you feel about those albums. Either way, you’ll appreciate Anselmo for being able to shout and growl like a caged beast for an entire show.

Review: “How I Met Your Mother” Series Finale 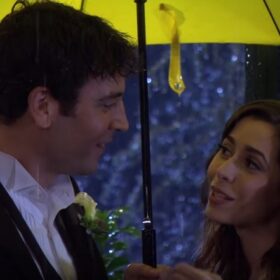