From the Archives: I wrote this satirical piece in December 2007, back when I was writing for a website that was kind of like Onion Sports Network – only we had tens of fans and visitors. I think it still holds up well, even today. Watch this week’s “NFL Blitz” and tell me Berman doesn’t do the same schtick he’s done for decades.

Bristol, CT — ESPN Headquarters is reeling over a stunning tragedy that occurred today. Longtime commentator and ESPN personality, Chris Berman, was gunned down in a bizarre and senseless act of violence. The culprit was his broadcast partner and on-air sidekick, Tom Jackson. Former NFL linebacker Jackson, better known as “TJ,” opened fire at approximately 1:00 this morning, right after doing a live NFL-recap segment known as the “NFL Blitz.”

According to sources at ESPN, Jackson stormed off the set, shaking his head and muttering “I can’t take it. I can’t take it anymore!” After a few minutes passed, he returned with his M-16 assault rifle and began to open fire at Berman. Jackson then shouted out: “That’s what you get for repeating the same jokes over and over again! All right?! If I have to hear you sing ‘My Sharona’ one more time whenever Rob Bironas hits a field goal, or hear you do a terrible rendition of ‘Mony Mony’ whenever Lawrence Maroney made a big play for New England, then I’ll go crazy! How does it feel, Chris?! Want to sing ‘San Diego… Super Chargers!!’ for me? Want to sing ‘If I Only Had a Brain’ whenever Marc Bulger throws a TD pass? Or talk about the New York Football Giants? Do they play in the Big Sombrero? Are they taking on the Rrrraaaiders? Huh? What do you say now, huh?”

According to police investigators, Jackson had become more and more frustrated as the NFL season wore on. “He hated having to laugh at all of Chris Berman’s jokes. I mean, the two of them have worked together for 20 years. He’s had to pretend to enjoy all of Berman’s bad puns, nonsensical nicknames, and obscure 70’s pop culture references for 2 decades. He’s contractually obligated to fake-laugh at everything Chris says. Not even Robin Quivers, Paul Shaffer, or Kevin Eubanks have to go through that. I’m surprised this didn’t happen sooner,” Det. John Malone stated.

Additionally, some at ESPN have speculated that Jackson could have had his mental breakdown a lot earlier than he did were it not for unforeseen circumstances. “It could have been really ugly,” Ron Jaworski noted. “If Jake Delhomme hadn’t gotten hurt early in the season, I don’t know if TJ could have put up with hearing 3 months worth of ‘Daylight come and you gotta Delhomme.'” Chris Mortensen agreed, stating: “Good thing they put Stuart Scott on location for Monday Night Football. Between Berman and Scott, it would have only been a matter of time before TJ went nuts. The only question would have been what set him off. Stuart Scott describing Tom Brady as being ‘As cool as the other side of the pillow,” or Berman making his high-pitched ‘Woop! Woop!’ noise every time someone fumbled.”

Apparently, one particular point of contention between the two colleagues was Berman’s running joke of asking Jackson if he was related to every single NFL player who happened to have the last name of “Jackson.” “I guess TJ got sick of Chris talking about his family all the time. I mean, it gets old after a while. How the heck can TJ be related to Tarvaris Jackson, Grady Jackson, Dexter Jackson, Steven Jackson, (Indianapolis DB) Marlin Jackson, (Buffalo RB) Randy Jackson, (Cleveland WR) Michael Jackson, Jesse Jackson, Samuel L. Jackson, and Andrew Jackson? His family can’t be that big. He isn’t Shawn Kemp or Travis Henry,” Det. Malone continued.

Others at ESPN have theorized that jealousy might have been part of the equation. “It’s a little known secret that Berman doesn’t always show up for his live broadcasts and that the producers just use a CGI generated Berman and sync him up with old soundclips from previous episodes of ‘NFL Countdown.’ That’s why it’s the same jokes over and over,” Sal Palantonio revealed. “It’s not unprecedented. They do the same thing for Barry Melrose. That’s why his mullet hasn’t changed in 5 years. No one can tell the difference because no one pays attention during the hockey highlights.”

Berman was admitted to the hospital and is in critical, but stable condition. Berman has promised to press charges, stating: “TJ… could… go… all… the… way… to jail! And if he gets out early, I’ll make sure to send him back-back-back.” An EMT then promptly put a tube down Berman’s throat, ostensibly to drain blood from his lungs. He denied that he was merely trying to put something in Berman’s mouth so that he could no longer speak.

Jackson faces 15 years in prison for attempted murder. However, there has been talk of a plea bargain. When asked for comment, a spokesman for the District Attorney has indicated that he would be willing to offer a reduced sentence in exchange for sending Jackson to FOX to work with Joe Buck and Tim McCarver. 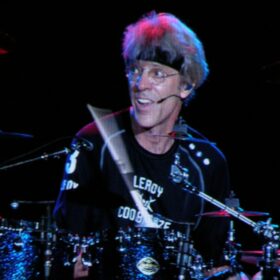