Comments Off on Not So Bitter, Definitely Sweet – A Concert Review of The Verve at MSG

However, as their one and only U.S. hit, “Bittersweet Symphony,” was making its way onto the charts, drugs and internal jealousies had driven the band apart. Controversy over songwriting royalties and credit for “Bittersweet Symphony” drove Richard Ashcroft to depression, while long-running resentments helped drive guitarist Nick McCabe out of the band. Despite the fact that “Urban Hymns” was released to almost universal acclaim, the band imploded and was never able to capitalize on their momentum. With all the bad blood between the members of the band, it seemed as if a reunion were about as likely as the Police, Van Halen, Genesis, Rage Against the Machine, and Led Zeppelin all getting back together. As such, it was fitting that, in the Year of the Reunions, the members of the Verve were able to put aside their differences and make music together again. After a tour in England, the re-formed Verve hit the U.S. for their first shows together in more than a decade. After a stop at the Coachella Festival, the Verve came to New York for two shows at the WaMu Theater at Madison Square Garden.

The band were clearly in good spirits throughout their nearly two hour set. “I love this city!” Richard Ashcroft proclaimed during the middle of the band’s set on the second of their two shows in the Big Apple. “I’d live here, but it’s too expensive,” he joked. “I want to get one of those places that overlook the park. Where a bunch of guys sitting around a table decide if I’m good enough to live there.” Hopefully, that wasn’t the main motivation behind this reunion.

Jokes and funny asides soon made way for nostalgia, though, as Ashcroft reminisced about the band’s early shows in New York. “Our first time in New York, we stayed at the Chelsea,” Ashcroft remarked. “We shot a video in the afternoon and played a show in the evening. We didn’t sleep at all.”

The Verve showed that they still had that rebellious rock ‘n roll streak in them as they went through their catalog of greatest hits, with a couple of new songs sprinkled in to whet their fans’ appetites for the upcoming new album. The band did their best impersonation of Guns ‘n Roses as they took the stage more than an hour late. “Only a few more months of Bush!” Ashcroft proclaimed when the band finally opened their set. The vast majority of their set contained songs from “Urban Hymns,” their most popular and most recent album. That seemed to suit the crowd just fine, as they sang along and pumped their fists to classics like “Sonnet,” “Lucky Man,” “The Drugs Don’t Work,” “Space and Time,” “The Rolling People,” “Come On,” “Weeping Willow,” and “Velvet Morning.” Older songs like “This is Music,” “Already There,” “A New Decade,” and “Life’s an Ocean” also generated great reactions from the crowd.

Ashcroft’s voice sounded every bit as deep and melodic as it did ten years ago, and his striking stage presence and command over the crowd showed why many experts and critics once considered him to be one of the best frontmen in rock. It wasn’t all about Richard Ashcroft, of course. Nick McCabe’s guitar playing showed the depth of his skill and talent as he alternated between playing traditional rock riffs and solos and producing his unique and spacy psychedelic sounds. Simon Jones, whose bass playing was solid and steady, spent most of the night pointing to the crowd and leading them in sing-a-longs. Peter Salisbury was spectacular on the drums, especially on “Come On,” the raucous number that closed the main set.

The biggest highlight of the evening, however, was during the encore. A group of fans sitting behind me had been chanting for “Bittersweet Symphony” all evening, including singing the orchestral hook (the hook that got the band into all their legal troubles in the first place) over and over again. The band obliged during the opening of their second set and brought the house down. Not a single person was sitting down as Ashcroft started singing; instead, everyone was waving their hands, bobbing their heads, and singing along. It’s clear that “Bittersweet Symphony” doesn’t belong to the record labels that squabbled over it in court. It certainly doesn’t belong to Mick Jagger and Keith Richards. It doesn’t even belong to the Verve anymore. It belongs to all of their fans that love the song and connect with it on a personal and emotional level. The songs that endure the passage of time are the ones that forge a deep connection with its listeners. If there were ever any doubt that “Bittersweet Symphony” is one of those songs, last night’s show put those doubts to rest.

The Verve clearly understand their position as elder statesmen and role models to the future generation of musicians. They even dispensed some free advice to up-and-coming bands interested in following in their footsteps. “Don’t drop acid on a Wednesday when you have to record the next day,” Ashcroft admonished. Good advice indeed. 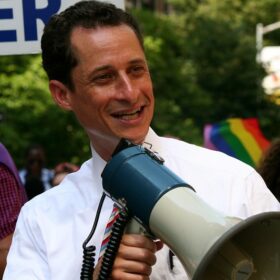