Comments Off on Not-So-Wonderful Tonight: A Review of Eric Clapton’s COVID Singles

For instance, on his recent tour, he refused to play venues that mandated COVID-19 vaccination as a condition of admission. “I will not perform on any stage where there is a discriminated audience present. Unless there is provision made for all people to attend, I reserve the right to cancel the show,” he said in July. Presumably, when he said “all people” he wasn’t just talking about non-vaccinated people but also those who have tested positive for COVID. He could have been more specific, but maybe the vagueness was the point.

Either way, his seeming hardline stance made him a hero in some political circles. Ted Cruz has repeatedly praised him, while Greg Abbott took a picture with him backstage and proudly posted it to his Twitter account. Clapton even appeared on noted anti-vaxxer Robert F. Kennedy, Jr.’s podcast. It’s like Clapton decided to spend his twilight years becoming the British Ted Nugent.

Then again, it seems his principles only go so far. His shows in New Orleans and Nashville went on as planned even though both arenas required either proof of vaccination or a negative COVID test within three days as a condition of entry. In an impressive feat of hair-splitting and verbal jiu-jitsu, his spokesperson said that Clapton had meant he wouldn’t play venues that required only proof of vaccination (although how keeping out people who had a positive test within three days of the show was consistent with his vow to perform for “all people” remains a mystery). In any event, Rolling Stone speculated that it was less about ideals and more about how he didn’t want to cancel the shows and lose out on that hard-earned money.

And for those saying that we should just forget about all of this and focus on his music — well, it’s hard when his recent musical output has been all about COVID. In the last two years, he’s released four mediocre-to-terrible singles railing against lockdowns, the vaccine and other things related to the pandemic.

The first, “Stand and Deliver,” was released in December 2020. Written by fellow music legend and anti-lockdown activist Van Morrison, the song has a generic blues structure and riff that Clapton can play in his sleep. It also contains racially-insensitive lyrics like: “Do you wanna be a free man/ Or do you wanna be a slave?” and “Do you wanna wear these chains/ Until you’re lying in the grave?” Those lyrics, as well as Clapton’s activism, in general, made Black blues great Robert Cray so uncomfortable, he pulled out as opening act of Clapton’s planned tour and ended their friendship.

It really isn’t much of a song — it’s really more of a diatribe about freedom, fighting a police state and being controlled by fear that’s accompanied by music. Perhaps that’s why it flopped and failed to chart (by contrast, at around the same time, a satirical punk band released a one-minute protest song called “Boris Johnson is a F****** C***” and it hit #5 on the UK charts). According to the Washington Post, Clapton wanted to record “Stand and Deliver” for his live acoustic album: The Lady in the Balcony: The Lockdown Sessions only to be told by his label: “Please don’t.”

The next two Clapton/Morrison singles, “Rebels” and “This Has Gotta Stop” dealt with similar themes. On “Rebels,” the two call out the rest of the musical industry and shame the vast majority of them for staying silent against the real threat (the lockdowns, not COVID-19). With its breezy riff and inspired guitar solo, this song is probably the best of the three “Slowhand and Van” songs.

It also seems like the angriest of the three, as Clapton and Morrison sound like a couple of cantankerous Boomers yelling at the kids to get off their lawn. “Where have all the rebels gone? Hiding behind their computer screens,” they complain. They also seem weirdly out-of-sync vocally, as Clapton maintains tight rhythms while he sings but Morrison syncopates. Maybe they were going for a raw, live feel to the song? Or maybe being in lockdown for so long affected their ability to listen to other people?

Meanwhile, on “This Has Gotta Stop,” Clapton and Morrison go for a weak Bob Marley reggae vibe (not the first time Clapton’s done that). The song uses Clapton’s bad reaction to the AstraZeneca vaccine as a framing device for expressing anger and frustration towards COVID-19 protocols, in general. “I can’t move my hands/ I break out in sweat/ I wanna cry/ Can’t take it anymore,” he intones. “This has gotta stop/ Enough is enough/ I can’t take this BS any longer.” It’s pretty unsubtle (and arguably, lazy) for a guy who’s accustomed to using symbols or concepts to convey his pain.

Finally, he released “Heart of a Child” today, his fourth COVID-related song (six more and he can release a concept album — maybe he can call it “AstraZeneca and Other Assorted Horror Songs”). The seven-minute song was co-written with Robin Monotti, a producer who is currently suspended from Twitter for spreading misinformation about COVID and vaccines. The two also made a video in which they recited a bunch of anti-vaccine tropes.

More lyrically subtle than his other pandemic songs, “Heart of a Child” is a somber acoustic ballad that is actually quite poignant and touches on an important side-effect of COVID lockdowns: missing your family members and loved ones. For instance this lyric definitely struck a chord with me: “We lost the love of a Man/ I was proud to know/ They locked you down boy/ Made you grieve alone.” After all, plenty of people lost loved ones and weren’t able to say a proper goodbye because of quarantines, travel restrictions and whatnot. As he’s noted in better songs: “time can bring you down, time can bend the knees.” And when we lose that time, it’s gone and we can never get it back.

Of course, Clapton (and Monotti) can’t leave it there —they need someone to blame. The government. Health scientists and virologists. Big Pharma. Pretty much anyone who, in their words, put “the fear” into you. “They put it to you/ They put it in your head/ Made you believe that/ You’d be better off dead.” I don’t think believing you’d be better off dead is the issue here. It’s more about not wanting to catch a potentially deadly disease with unknown long-term consequences, right? But for Clapton, being cooped up inside and not being able to play “Wonderful Tonight” live for the one millionth time is as good as being dead.

Throw in last week’s news that Clapton successfully sued a woman in Germany for unknowingly selling a bootleg CD on eBay, and you can see why people are starting to turn on Slowhand. (Clapton’s team released a statement two days ago saying they would drop the case and waive the attorneys’ fees they had been awarded.)

So if he needs more COVID songs for that concept album and doesn’t have any more original tunes, maybe he can re-record some of his most-loved songs with new lyrics so he can spread his message more. Maybe he can start with “Layla”:

What’s going on in this country?
Nobody’s on our side
They’re in hidin’, locked down too long
They don’t have no stinkin’ pride

[Verse 2]
Tried to warn you ‘bout immigration
Politicians let us down
Like a fool, I got the jab for you
Turned my whole world upside down

[Outtro – the piano/guitar instrumental made famous by that scene in Goodfellas where Jimmy whacks his co-conspirators — maybe this montage will include scenes of Clapton killing his own career]. 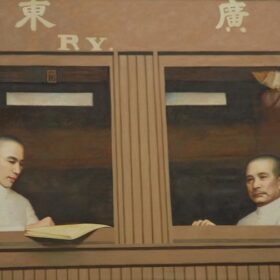