Comments Off on Album Review: “Songs of Innocence” by U2 (UPDATED)

On Tuesday, the band stunned the music world when it made a surprise appearance at Apple’s iPhone 6 and iWatch product launch event in Cupertino, CA. CEO Tim Cook brought the band out to perform a new single, “The Miracle (of Joey Ramone),” after which the band announced that its new album would be made available to Apple iTunes’ half-billion subscribers for free. For iTunes users, the album is automatically loaded into their music libraries and all they have to do is click on it in order to download the album. It’s a unique system in that, while giving away albums is nothing new, putting it in a user’s library without prior consent is a pretty radical departure from the norm. (In a way, it’s kind of like what Columbia House or BMG used to do when it would send you crappy albums you never asked for and bill you if you didn’t return them in time)

On the one hand, U2’s decision to simply have Apple essentially buy 500 million copies of its work and give it out to its customers for free is the final nail in the coffin for the old distribution model. On the other hand, it’s a move that reeks of desperation – almost a tacit admission that the band can no longer sell enough albums on its own and needs an intrusive action from the biggest online music store in the world. Looking at U2’s declining sales (2009’s “No Line on the Horizon” barely went platinum in the U.S. and sold one-third of what “How to Dismantle an Atomic Bomb” did), it’s not a stretch to think that the band came to the latter conclusion when closing what the Wall Street Journal reports could be a $100 million deal.

The other irony is that, while the distribution model is revolutionary, the album breaks no new ground. Originally conceived as a quick follow-up to “No Line” using songs from the same recording sessions, the album took five years and just as many producers to complete (there are production credits for Danger Mouse, Paul Epworth, Ryan Tedder, Declan Gaffney and Flood).

Unlike the experimental “No Line,” “Songs” is more reminiscent of early U2 and is thematically similar to “Boy.” In a way, “Songs” is U2’s second “back-to-basics” album alongside 2000’s “All That You Can’t Leave Behind.” Unlike “Boy,” which focused on growing up, in general, “Songs of Innocence” looks back at actual, seminal events from the band members’ childhood days. Bono’s mother, who died when he was only 14 after suffering an aneurism at her father’s funeral, looms large on the album as both “Iris (Hold Me Close)” and “Volcano” deal with her untimely passing. Falling in love for the first time is the main theme of “Song for Someone,” which is one of the better songs on the album. “Raised By Wolves” is about a car bombing that happened near Bono’s home when he was a child (and undoubtedly helped shape his views for songs like “Sunday Bloody Sunday” and “New Year’s Day”). The band also pays tribute to punk bands The Clash and The Ramones, who were huge influences during the early days of U2’s career.

Indeed, “Songs” is far more fascinating when viewed as U2’s origin story. That’s because, musically, the album is not very good. In fact, it’s probably the worst U2 album since “Pop,” and like that earlier misadventure, the band signed a contract that committed them to deliver an album by a certain date (in this case, Apple’s product launch), regardless of whether or not the album was up to the band’s admittedly high standards. Maybe with some more time (and without Tim Cook’s secretary bugging them with texts and voicemails) the album would have been better.

Then again, they’ve had more than five years to make this record. It’s easy to dismiss “Songs of Innocence” as merely a collection of filler tracks that weren’t good enough to make it onto “No Line.” That’s not entirely accurate, but it’s not far from the mark. “No Line” was rightfully maligned, but it did have several excellent songs on it, notably “Magnificent,” “Breathe,” “Moment of Surrender,” and “I’ll Go Crazy If I Don’t Go Crazy Tonight.” As for “Songs,” however, there are maybe three legitimately good songs: “Song for Someone,” “Every Breaking Wave” and “The Troubles.” “The Troubles,” in particular, has a haunting beauty to it, thanks, in no small part, to an ethereal guest vocal from Lykke Li (no relation to me).

The rest of the album is a disappointment. “The Miracle (of Joey Ramone)” is a weak lead-single (much like “No Line’s” “Get On Your Boots”) and the “ohhh, wah, oh wahhh” intro seems like a cheap attempt to get fans to sing along (to say nothing of the fact that Danger Mouse, one of the song’s three producers, produced a song with a similar vocal riff: “Lonely Boy” for the Black Keys). U2 likes writing songs that have both religious and secular interpretations, and that dynamic is present on “Miracle.” Unlike some of the best of these songs (like “Mysterious Ways” or “I Still Haven’t Found What I’m Looking For”), “Miracle” lacks a memorable chorus and opening riff and plods along until the soccer-chant riff.

The album also sidelines The Edge and Adam Clayton for long stretches. The Edge’s trademark soaring guitar sound is surprisingly muted and only present on a few songs (perhaps not coincidentally, two of those songs are standouts, namely “Song for Someone” and “Every Breaking Wave”). Likewise, Adam Clayton, whose crunching bass sound is, arguably, as important to the band as Edge’s guitar work, only stands out on one song, “Volcano” (“Vertigo’s” inferior brother – the Frank Stallone, if you will). Grantland wondered whether this album was really just a Bono solo album that got turned into a U2 album by necessity. Given the intensely personal nature of Bono’s lyrics, it’s a worthy hypothesis.

“Lucifer’s Hands,” a song from the bonus disc, is, in many way, superior to the songs on “Songs of Innocence.” Built around the much talked-about “Return of the Stingray Guitar” riff that U2 performed during the latter legs of the 360 Tour, the song doesn’t quite fit in with the rest of the album. After all, it’s one of the few songs on the entire collection where Edge, Adam Clayton and even Larry Mullen are unleashed and the result is a thumping dancer that is sure to be a hit on tour. Like other great U2 outtakes/b-sides like “Lady With the Spinning Head,” “Fast Cars,” and “Where Did It All Go Wrong,” the song is somewhat repetitive (maybe that’s why it didn’t make the main disc). Then again, that’s not always a bad thing, especially if the riff is good (it’s great) and the lyrics are interesting (they certainly are- the song could be about all sorts of things – there are homages to the Velvet Underground, religious references, callbacks to earlier songs, etc.).

The other original song is “The Crystal Ballroom,” which sounds a little like Roxy Music (are we sure Brian Eno didn’t produce it?). Other than the two originals (both of which are quite strong), the bonus disc consists mainly of alternate versions of songs on the main disc. They are all forgettable, except for the alternate version of “The Troubles.” Sung only by Bono, it’s an interesting take on the song, but it also serves to underline how important Lykke Li is to the album version (I swear, she’s not related to me – I just think she was great on the song).

Ultimately, none of this might matter. Apple’s aggressive distribution method is surely a one-off as U2 is one of the few artists that could justify such a move. Moreover, the album is probably just an excuse for the band to tour. After all, “No Line” flopped, but the 360° Tour was a huge success that set a record for highest-grossing tour of all-time. With a stronger album, U2 could have threatened the $1 billion mark this time around. Instead, they’ll probably have to settle for half that. Poor guys. 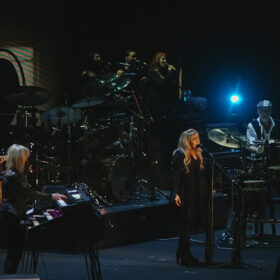