Comments Off on Album Review: “Grand Romantic” by Nate Ruess

I can’t decide whether Nate Ruess is great or grating.

On the one hand, he’s a fantastic vocalist. Possessing the range of Freddie Mercury and the chops to match, the fun. (yes, that’s apparently how it’s supposed to be spelled – complete with the confusing period at the end) front-man can blow anyone off the stage with the power of his voice. I have no idea what his vocal range is, but I imagine he’s up there with the likes of Mercury, Mariah Carey and Christina Aguilera in terms of real estate covered on a typical piano keyboard. Refreshingly, he’s not like the SNL-version of Celine Dion who feels the need to show off his voice and upstage everyone. Instead, like Mercury, he knows when to hold back and when to let loose. It’s not as easy as it seems. It took years for Michael Bolton to finally learn how to do it.

On the other hand, his prowess as a songwriter leaves a lot to be desired. “Probably my biggest thing is that I just have a tough time sitting down and really committing to writing lyrics,” Ruess told Rolling Stone.

Take fun., Ruess’s band that’s definitely not breaking up as a result of his solo album or guitarist Jack Antonoff’s success with his side project, Bleachers. Fun.’s entire appeal is that, beneath the hipster-friendly exterior, electronic flourishes and over-production, the band is a sincere, unironic pop act that’s merely masquerading as an indy band (one critic had a funny line about how fun. would have to change its name to “fun?” to be a true hipster band). The flip side to that coin is that fun. tries to make its songs overly complicated and profound so that it may separate itself from the likes of 1D and Taylor Swift. Ruess’s serious and narrative-style lyrics play their role by contrasting with the simple vocal hooks and choruses that listeners tend to remember about a song. Obviously, there’s nothing wrong with that – plenty of artists disguise serious subject matter with simplicity. When it comes to fun., however, it can be extremely jarring and exhausting to deal with all the overly long melodies, overwrought metaphors (war and bars are favorites), and constant tempo and meter changes in the verses only to get to a very simple (yet catchy) chorus. Worse, Ruess’s lyrics aren’t particularly memorable, at least not compared to his vocal hooks. He ends up saying a lot without really saying anything at all.

Still, the fact that he decided to record a solo album instead of doing another fun. album is a pretty daring move. “Grand Romantic,” was supposed to be the band’s follow-up to its smash 2012 album, “Some Nights.” However, Ruess decided to keep the songs for himself – a decision that, apparently, his band-mates weren’t happy about (but they’re definitely not breaking up, no sir). Ruess even retained “Some Nights” co-producer Jeff Bhasker for his solo debut – a decision which, I’m sure, also didn’t sit well with his fun. bandmates. His stated reason was that the songs that ended up on “Grand Romantic” were too personal and he finally felt comfortable enough to do them on his own. Indeed, the themes include contemplating suicide (“AhHa“- the second single), dealing with heartbreak (like, half of the album) and longing (lead single “Nothing Without Love“). Ironically, the whole reason for Ruess deciding to go solo was because he’s happier than he’s ever been. He’s in love, his career is flourishing and, thanks to the runaway success of fun., as well as his own acclaimed collaborations with the likes of Pink and Eminem, he now has the clout to get the likes of Beck, Jeff Tweedy, Josh Klinghoffer and Lykke Li to join him in the studio.

For some songs, ditching his bandmates allows Ruess to indulge in his worst tropes as a songwriter. His first two singles, “AhHa” and “Nothing Without Love,” are full of melodrama and the kind of vocal histrionics that would make Aguilera blush. “AhHa,” especially, is a cloying number that utilizes powerful drums and foot-stomps in an effort to be an epic, bombastic song the way “Some Nights” was for fun. (Ruess even refers to “AhHa” as the “evil twin” to “Some Nights”- whatever that means – maybe “AhHa” has a goatee or something). “Nothing Without Love” sees Ruess trying his best to ape Mercury (he especially sounds like the Queen frontman when he sings: “Oh baby, show me a sign; Send up a signal that everything’s fine”). The song clearly misses Antonoff’s Brian May-esque guitar licks – as well as any memorable lyrics or instrumentation. There is a somewhat catchy vocal hook (just like in “AhHa”), which makes sense since Ruess always did excel at coming up with those.

On other songs, Ruess demonstrates new-found restraint while experimenting with different genres. He even manages to keep it simple on some songs. “Moment” is a perfectly acceptable adult contemporary song while “Brightside” is a pleasant song that serves as a nice comedown after an album full of wangst (although it does have lyrics like: “From up here I can see the Carlyle; I can see the Louvre shining in your eyes”). Ruess’s collaboration with Beck results in one of the best songs on the album. “What This World is Coming To” is a country-tinged ballad that substitutes typical Ruess bombast for an uncharacteristically low-key song that features tight harmonies with Beck. “Take it Back” is another surprisingly mellow tune that benefits from Tweedy’s guitar solo. Other collaborations fall flat. For instance, Lykke Li, who was so great when collaborating with U2, gets completely buried in the mix for “AhHa.” What’s the point of recording her, then?

Ultimately, “Grand Romantic” has its moments, but is a forgettable album that probably won’t launch Ruess’s career to the next level. Hopefully, he didn’t delete his fun. bandmates from his contact list. 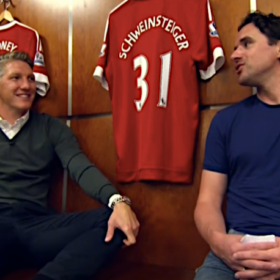