Comments Off on Album Review: “New Constellation” by Toad the Wet Sprocket

Most people I spoke to responded with three words when they found out 90’s alterna-pop band Toad the Wet Sprocket had reunited and were releasing a new album in October. “They’re still around?”

Yes. Like many of their brethren, Toad broke up for a number of years before reuniting in time to capitalize on the recent wave of nostalgia for 90’s music. Consider this (consider this!). In the last few years, the following bands have reunited and released new albums or EPs: The Pixies (sans Kim Deal), My Bloody Valentine, The Spin Doctors, Blink 182, Mazzy Star, Suede, Blur, Limp Bizkit, The Gin Blossoms, 98 Degrees, The Backstreet Boys, Stone Temple Pilots (both with and without now-former lead singer Scott Weiland), and Soundgarden. I’m sure I’m forgetting a few.

Toad may not have hit the same heights as several of their fellow alternative pop bands (The Gin Blossoms’ breakthrough album, for instance, went quadruple platinum in the U.S. – outselling Toad’s best known album, “Fear,” by a factor of four), but they managed to compile a deceptively large collection of memorable songs along the way. If you were a music listener in the 90s, you probably know (and like) more Toad songs than you think. There are the pop hits (“All I Want,”“Walk on the Ocean,”“Something’s Always Wrong”), the songs that made it to Billboard’s Modern Rock chart (“Fall Down,” “Come Down,” “Come Back Down” – there may be a “Fall Back Down” gathering dust in the vault somewhere – who knows?), the dubious hits that the band used to pad their stats on their “Greatest Hits” collection (“Whatever I Fear,” “I Will Not Take These Things for Granted,” and “Crazy Life”), and the one from “Friends” (“Good Intentions”).

“New Constellation,” the first new Toad album since 1997, does not have any songs on par with those classics. But it’s not a bad album (in fact, it’s much better after a second listen). Funded by a Kickstarter campaign that raised over $250,000, the new album is, understandably, sparsely produced. That’s not necessarily a bad thing. After all, Toad (as well as frontman Glen Phillips in his solo career) seem to prefer the minimalist approach without the bells and whistles that sometimes accompany a slick studio product. In fact, when the band first reunited, the first thing they did was re-record their greatest hits on the cheap (some would say they produced inferior covers of their back catalog)- a move that was more about royalties than getting reacquainted with one another.

In this case, the lack of production doesn’t hurt the album. Things get off to a great start with the title track, which is catchy and fun. The second track, “California Wasted,” is the best song on the album and would have been a better choice for lead single than the title track. “The Moment,” “Get What You Want,” and “I’ll Bet On You” are fine additions to their catalog and will, no doubt, be crowd-pleasers at concerts.

What’s really striking about this album is the subject matter. While Toad has never been known as an “edgy” band, they were quite adept at writing songs about subjects like rape, drug addiction, or kids spying on a whorehouse only things go badly after one of them breaks his leg, all the while making them sound like happy pop songs.

Instead, “New Constellation” is more about happiness, contentment, and how glad they are to be back together after ten years (give-or-take) apart. Take “Golden Age,” a song that opens with the self-aware line “A decade in the wilderness/ How did we ever come to this?” In “California Wasted,” Phillips asks “Where did the time go?” The band does tackle topics such as heartbreak, breaking up, and moving forward – an interesting irony considering they’re back together. However, rather than focus on the depressing side of those topics, the band opts for the uplifting side. On “The Moment,” Phillips sings: “There is nothing but the moment/ Don’t you waste it on regret.” On “I’ll Bet On You,” it’s: “We’ve all been hurt/ It’s nothing new/ Just bet on me/ ‘Cause I’ll bet on you.” And, of course, on “Life is Beautiful,” guitarist Todd Nichols puts his voice to perhaps the most straightforward song the band has ever done. “Life is beautiful, beautiful/ Don’t you ever surrender to the voices in your head.”

It’s understandable that the band members would mature and take a page out of band name inspiration Eric Idle’s playbook and start looking at the bright side of life – albeit unironically. Phillips said as much, telling Smashing Interviews Magazine that “there were some ‘complaining’ songs in the past” and that he “did want the record to be more positive.”

The band certainly succeeded in that respect. Ultimately, “New Constellation” is a fine album and a nice excuse for the band to hit the road. It certainly won’t be as painful sitting through the new songs just to hear the old ones (or “paying the tax” as I call it) as with some other bands that were popular in the 1990s. 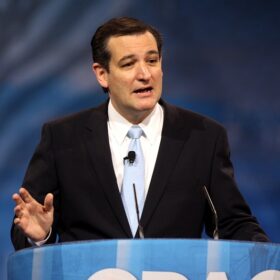