Much like the Schaumburg show, there were an overwhelming number of vendors and dealers on the bourse who seemed to have more silver and gold than Fort Knox, and more Morgan and Peace Dollars than actual dollar bills. Just like the Schaumburg show, I ended up spending more time (and money) with the vendors that distinguished themselves from the pack, such as exonumia, foreign and colonial dealers. I’ll talk more about the coins I acquired from the World’s Fair of Money in Part 2 of this post.

In the meantime, the clear highlight of this show were the coins I did not buy:

From the exhibit of rare and historic coins, this Lincoln cent, at first glance, doesn’t look very noteworthy. In fact, it looks like nearly every other penny from that era. However, this coin is one of rarest coins in U.S. history and the most valuable Lincoln cent – much more than the famed 1955 doubled-die error cent or the 1909-S VDB penny. That’s because in 1943, owing to wartime shortages, the U.S. Mint started making pennies out of a steel-and-zinc alloy so that the copper and bronze that usually went into Lincoln cents could be saved for the important task of making bullets. Apparently, a few copper-bronze cents were struck by accident when a Mint employee forgot to put the new steel planchets into the press, creating two-dozen or so error coins that are now worth a fortune. In 2015, one such penny was sold for $1 million.

One of the best things about this exhibit was that I learned about coins I had no idea existed. Designed by famed coin engraver George T. Morgan, who was responsible for the bourse-ubiquitous Morgan dollar and the Columbian Exposition commemorative half dollar, the “schoolgirl” dollar was proposed as a possible update to Morgan’s dollar. The “schoolgirl” in question is not the 1879 version of Britney Spears, but a young version of the Lady Liberty bust used on the obverse of the Morgan dollar. Jokes aside, this is a beautiful coin. Given how the Mint loves to recycle old coin designs, maybe they can use this one for a coin – like the vibranium bullion eagle or something.

Another interesting pattern dollar coin on display was the 1872 Amazonian coin. Designed by U.S. Mint Chief Engraver Charles Barber, who was most famous for his Liberty head themed coins in the late 1800s/early 1900s, this pattern coin featured a seated Lady Liberty between a sword and shield on her left and a bald eagle on her right. With her hand outstretched, it looks like she’s trying to pet the eagle, but that’s probably just a lack of depth perception on the engraving. Barber used this design for a quarter and half-dollar pattern, but they were rejected for being “too militaristic”.

And this was a coin I saw on the bourse and desperately wanted to buy. After the Revolutionary War, many private minters struck all kinds of medals, tokens and coins to honor the father of our new country. Some even submitted their coins to Congress in the hopes that they would be adopted as official currency. This particular coin was a private issue – according to PCGS, the reverse only bears 8 stars, 6 arrows and 8 olive branch leaves as opposed to the usual 13 of each. Nevertheless, this is one of the nicest George Washington pennies I’ve ever seen. Alas, the dealer wanted $1,650 for it. That, plus the money I’d have to spend on a hotel room because my wife would never let me back into the house if I had bought this coin, was just a bit out of my price range. Maybe next decade. 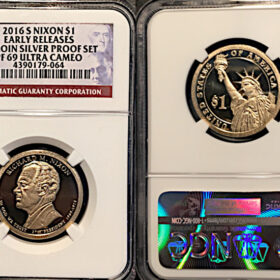